The fruit of the righteous is a tree of life; and he that wins souls is wise.

What is a bunker? It is a safe place to be in when a battle is breaking out all around you. It is a hedge of protection where you can regroup, reload, re-supply and rest before going out into the battlefield. That is what WAHU men do is they find an oppertunity to help individuals that need help and could use some reinforcements to come in and help out from time to time in various capacities to replenish the sprits of the people so they can go back out into the spiritual battle realm and succeed.

If you want more details on why we call them WAHU Bunkers: Click Here﻿

Wild At Heart University is taking up donations to put together care packages of items such as:  food (Ham, canned and boxed goods) and toys for families in the area that are not able financially to do Christmas this year. Each care package will cost approx. $40, depending on how much we collect, will determine the amount of families we will be able to bless. We would like to set a goal to bless 25 families in our community. We will reach out to the pastors of the churchs to see which families they are aware of that need a blessing. Those who donate to this cause your names will appear on the care packages to let the families know who you are. This campaign will end on 12/1/2020, in order for us to gather the necessaryy items to present to area families before the Christmas holiday. 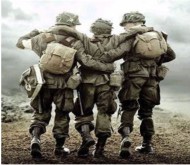 If you would like to help sponsor a WAH candidate you can do it through the on-line giving.

Did you not know that (we) must be about (the) Father’s business?

"And if it seems evil to you to serve the LORD, choose for yourselves this day whom you will serve, whether the gods which your fathers served that [were] on the other side of the River, or the gods of the Amorites, in whose land you dwell. But as for me and my house, we will serve the LORD."

As iron sharpens iron, So a man sharpens the countenance of his friend.

The LORD is a man of war; The LORD ​is His name.

We utilize WebEx online conferencing program. Click the icon above to quickly enter into a scheduled conference.

Note: We will provide a meeting number that you can gain entry into our conference room.